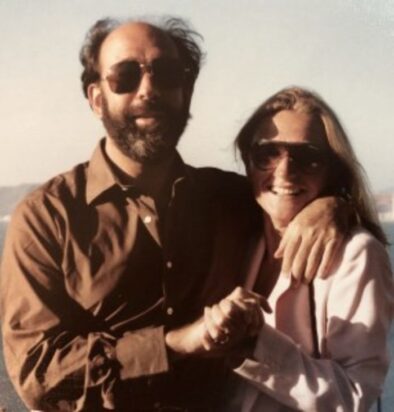 Do a Google search on Robert Ornstein and you’ll see right away that, as an eminent psychologist, he was a pioneering researcher into the two halves of the brain. You’ll also find that he authored and co-authored dozens of books with a wide gamut of intellectuals, and that he founded and headed the California-based institute ISHK.

Observing a life by reading about it online as we tend to do, picking through Wikipedia and other such sources, you get a basic sense of who someone was and what they did. And, if you don’t know much about them, you think you have a clear understanding of what they were all about.

In Bob Ornstein’s case, you would see that he was born in Brooklyn in 1942, that from his teens he was a shooting star in the fields of mathematics and then psychology. That after moving out west in the swinging sixties, he took a PhD at Stanford, his thesis published under the title On the Experience of Time. You would learn, too, of his further research into consciousness, and of his many collaborations. With luck, you would get an overall sense that he was driven like few others – a human dynamo if ever there was one.

A life is best considered not through its milestones that, when laid flat, pave a pathway, but rather by reflecting on the grouting that links one to the next. Bob Ornstein’s milestones were many, varied, and were anything but ordinary. But, for me, the real interest comes in observing the stuff usually left out.

I don’t know how he came to be as he was, but Bob was a man of vast and polymathic interests and knowledge. I can only assume he was born that way. While those in his peer group were embarking on conventional lives for themselves, Bob was hard-wired differently. He wasn’t content with doing what everyone else was doing, or thinking like them. That may not seem surprising by today’s standards – but, half a century ago, it was much safer for a budding academic to keep their head well below the parapet and follow all the rest.

Tapping into the pulse of emerging technology, Bob put himself at the forefront of new research into the workings of the brain. In hindsight, it was an obvious place for him – an arena that provided funding, exposure, and potential glory. What an extraordinary time it must have been, with monthly breakthroughs in our understanding of the brain and in consciousness itself.

In the summer of 1974, TIME devoted an entire story to him – then aged just 32 – reporting how, at the American Association for the Advancement of Science convention in San Francisco, he had attracted an audience of 750. TIME’s piece declared: ‘Not only scientists but philosophy students and yoga practitioners are drawn to hear him because of his venturesome effort to reunite science and spirit, reason and intuition.’

For Bob Ornstein research wasn’t the whole picture, but rather only a part of what was going on. While his peers threw themselves into life-long studies of research, telescoping down on minutiae, Bob opened the canvas out wide – and began asking questions as broad as the human condition itself.

In an era before the Internet, (the infrastructure of which coincidentally was being built within a stone’s throw from his Los Altos home), Bob immersed himself in material from every conceivable area of study. Instead of reducing his thinking, he allowed it to widen exponentially, sucking in influences that would have been regarded as a dead end by anyone else.

My father, the writer and thinker Idries Shah, was surely one such influence. As I understand it, Bob Ornstein read his book The Sufis when it was published in 1964. Still in his early twenties, he grasped right away what my father was saying about humanity and thought. While his peers were looking inwards, Bob looked outwards, searching for new thinking – embracing an ancient acumen that has shaped and inspired human society for millennia.

By the early seventies Silicon Valley may not have yet quite taken off, but all the main pieces and players had arrived. Bob remarked casually to me recently that he would gather informally with a small group of friends living locally, to discuss how and why people thought as they did. Among them, he told me, without any surprise, was Steve Jobs – well known of course for his interest in Oriental mysticism. They would swap books, he said, with him giving Jobs copies of my father’s work.

Around the same time, Bob arranged several lecture tours and symposia for my father in the US. They toured the country together, during which Bob would struggle to explain why things there were how they were. All the while my father turned what he saw inside out, viewing it through an Oriental lens.

Once, when they were sitting together in the lobby of a swish New York hotel, Bob told me that my father erupted into a fit of laughter so unbridled that he feared he might drop dead right there and then.

The laughter was no doubt roused by Bob’s own infectious blend of humour, which was quite unlike anything I have ever experienced. Deftly understated, it was the fusion of Monty Python and Woody Allen – always delivered deadpan. Bob would have his audience rolling in the aisles one minute and, the next minute, would be extracting subtle lessons from the joke.

As with my father, his great delight lay in the humour of the medieval folkloric character, known in our family by his Afghan appellation – Nasrudin. My father’s published corpus contains hundreds of stories featuring the wise fool. Through his expertise as a research psychologist, Bob Ornstein went further than merely recounting tales and deciphering them. He studied their actual effect on the physiology of the brain.

In addition to hands-on research, he read, and read, and read. I’ve never encountered anyone who devoured so many books, academic papers, and magazines. Chat to him about anything and, in all likelihood, Bob was on the pulse of the latest thinking or research. In recent years he would email me links to all kinds of things he thought I would find interesting – and which I always did.

In a great many cases I usually didn’t grasp how spot on he was with an emerging technology or idea until days or even months later. But he always was. It was proof of his knack – the knack of sifting out certain notes from the noise… isolating them, and sending them back out into the world.

Similarly, as I mentioned, Bob tied up with all kinds of people, collaborating on groundbreaking books. What always struck me was that he didn’t regard the household names who were his close friends as celebrities, but rather as merely the right people to bounce ideas off, and with whom to push boundaries of thought.

Staying with Bob and his wife Sally over the years in their rambling magical home, I found myself in conversations with all sorts of people. People like the anthropologist Edward T. Hall, the environmentalist Paul Ehrlich, and the science historian James Burke.

Looking back as I am doing now at those remarkable partnerships, there’s one which is perhaps less appreciated but was certainly the most profound – Bob Ornstein’s collaboration with his English-born wife, Sally Mallam, who has been a close family friend since before I was born.

Together, they established Hoopoe Books, releasing a series of illustrated stories written by my father for kids in Afghanistan and elsewhere – stories that were set down for my sisters and I when we were children. More than twenty years after my father’s death, Hoopoe’s books have been given out for free to literally millions of kids – inspiring young imaginations just as they did ours.

When I think of Bob, and indeed, Sally, I am touched by so many wonderful memories, many of them humorous. But there’s one memory that stands out proud among them all.

In the summer of 1984, I was 17 and had never travelled alone before. My father had the grand idea of sending me to learn to fly aeroplanes in the US. I was later to realize in horror that it was at one such flight school that the 9/11 terrorists did their basic training.

On passing the course, I flew west to stay with Bob and Sally. I lived on potato salad and watched old movies on video. I had no idea of anything – something Bob Ornstein must have clocked right away. One evening at dinner he told a series of hilarious jokes. Then, as I recovered from the laughter, he reached out and touched a hand to my wrist.

I looked up anxiously.

‘You’ve got a hard act to follow,’ he said. ‘Take my advice: Carve out a path of your own.’